A RATIONAL MANAGEMENT OF OUR WATER RESOURCES 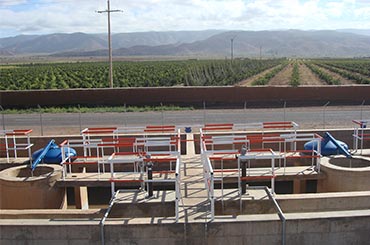 Nareva has developed the El Guerdane zone irrigation project as part of a public/private partnership.

This facility serves two purposes: safeguarding the citrus growing area and rebalancing the underground water resources, through the mobilization of an alternative resource, namely by regulating the surface water thanks to the Aoulouz/Mokhtar Soussi dam complex. This facility serves 600 farms, for an annual allocation of 45 million m3, on an irrigated area of 10,600 hectares.

Held by the Amensouss subsidiary, this project was initiated in 2005 with the execution of the "delegated management agreement" implemented with the Ministry of Agriculture. Its commissioning has been effective since 2009.

The water stress context in Morocco makes water an increasingly scarce resource, which must be treated and used in a responsible, sustainable and viable manner.

Nareva intends to provide an appropriate response to the growing demand induced by climate change, population growth and growing urbanization.

Thus, following the call for tenders launched by the Ministry of Agriculture, Maritime Fisheries, Development, Water and Forests, the Nareva/Engie consortium was selected and declared provisional contractor in 2019, with an innovative hybrid project in the region of Dakhla.

Made up of a seawater desalination plant producing 90,000 m3/day and a 40 MW wind farm, this project, carried out by public-private partnership, aims to serve the socio-economic development of the Southern Region, by offering experienced know-how in wind energy, but also by being in line with the National Water Plan.